I have added support for thin-film interference to the following materials:
It can be used for oil slicks, soap bubbles, oxid layers on heated metal, car paint, anti-reflective coatings, beetle carapace etc.
The resulting colors depend on the thickness of the film, the refractive index of the film, and the angle between surface and viewer. 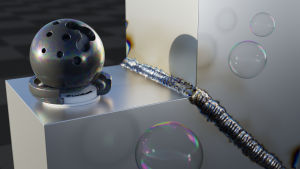 In the Blender addon, the "glass" and "disney" nodes now have a "Thin Film Coating" checkbox.
If enabled, you can specify the thin film thickness (in nanometers) and the IOR of the coating material with two new sockets.
On the disney node, there is an additional "Film Amount" socket so you can mix in more or less of the film effect. 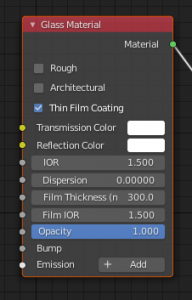 The disney material has the additional property

which is the linear interpolation factor between no film and film.
Thumbnails for Cycles Image Nodes | Donate to LuxCore
Top

Yup, this is a fantastic addition.

My Behance
Luxcore on Trello
Top


Would it be possible to add film option also to anisotropic metal shader? Because the disney anisotropic works kinda weird and has less options.
Great addition btw!
Top

Weldone.
Which revision could I use so I can add thin-film interference to MaxToLux?
Omid Ghotbi (TAO)
Download link to last MaxToLux build.
viewtopic.php?f=5&t=1010&start=160#p22925
Top

You will need the latest daily build of LuxCore.
Thumbnails for Cycles Image Nodes | Donate to LuxCore
Top

I tested this out on my camera scene: 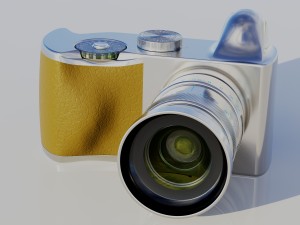