Use this forum for general user support and related questions.
Forum rules
Please upload a testscene that allows developers to reproduce the problem, and attach some images.
Post Reply
58 posts

Exactly. It only works if the light source (or the camera in case of light tracing) are intersectable.

The normal way in ray tracing is this: You shoot a ray into the scene, then you check which object the ray intersects. From that intersection point, you check if the light source is directly visible - i.e. no other object lies between them - and if yes, calculate the brightness of that ray according to what the probability is that the ray would bounce in that direction, depending on how matte or glossy the surface is.

With a perfeclty specular material, the probability is always 0 except in one direction. Then the above is not possible, because you can't know easily for arbitrary geometry by which path a ray would connect.

So therefore, a ray path ending with Specular can only happen by random intersection, which is only efficient if the light source appears large from that object, or is something continuous like an HDRI background.

SDS paths are so special because they start and end with specular, so coming form either camera (path tracing) or light (light tracing), it is equally impossible.

BiDir starts tracing from both directions and tries to connect them. For this algorithm,the problem the becomes that both rays would have to randomly end up on the exact same point on the diffuse surface, which is equally unlikely.
Metropolis sampling does not change that.
Top

Thanks for the explanation, appreciated!

So when I use area lights surrounding a scene (along with a HDRI environment), Bidir + Metropolis should have no limitations, and will even calculate SDS paths?

And by "intersectable", do you mean a light should have at least a little volume, or does only area suffice?

That would explain why this scene of mine shows SDS caustics (if I'm not mistaking) on the dragon's body part that is inside the water, despite being rendered with Metropolis + Bidir: 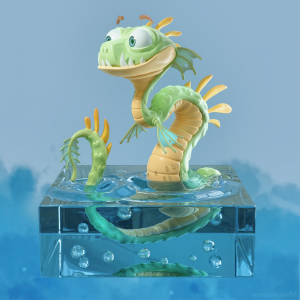 Eager to find out what causes the very noticeable difference in specular highlights between Path + Sobol and Bidir + Metropolis, I did some testing...

I even switched from CUDA + OptiX to OpenCL to see if that helped, but no. Then I decided to switch from GPU to CPU, and yes, the specular highlight was suddenly comparable to Bidir + Metropolis! May I conclude that CPU calculations are more complete / accurate than GPU calculations?

This would be a pity, as choosing for the CPU of course brings the disadvantage of having to sacrifice GPU rendering speed.
visualizer • illustrator • animator • 3D designer — metinseven.nl
Top

CPu and GPU should deliver the exact same result, if you find in path + sobol some difference between CPU only and CPU + GPU or GPU only you should report this with an example scene, it's a bug I would say

This is because you have to be able to mix render nodes and retrieve the exact same result, or an animation would be a nightmare of flickering

Thanks, I thought so too.

BYOB already has my pumpkin scene, so he can check it out. If his findings are not the same, it might be caused by my hardware configuration.
visualizer • illustrator • animator • 3D designer — metinseven.nl
Top

It could be helpful for him if you describe exact steps to see the problem in an obvious way.

Haha, yes, after (de)activating all kinds of caches and rendering modes, I found out that the specular difference is simply a matter of switching between GPU and CPU, where the CPU result looks considerably better.

You can see the difference in this post.
visualizer • illustrator • animator • 3D designer — metinseven.nl
Top