Use this forum for general user support and related questions.
Forum rules
Please upload a testscene that allows developers to reproduce the problem, and attach some images.
Post Reply
7 posts • Page 1 of 1

Hello, some time ago around the year 2015 I was using Luxrender to model and simulate an LED pointed at a flat diffuse target 1m away. Once the model was set up I push the render button, and a separate Luxrender window would open. The render would progress during which time I could choose a tonemapper. I was able to calibrate some multipliers in my LED+light model, and using the False colour tonemapper, I could read the Radiometric intensity by use of the tonemapper gradient, and also read values directly by hover my cursor over the image.

Fast forward to this year, and I am trying to get physically based measurement from LuxCoreRender .....
1) I dont need the mulitpliers I used previously, as the lights can now be set in watts, candelas, or lumens.
2) I can find a section where I can use a false colour tonemapper.

My questions are ...
1) How to I set the colours, banding and scales of the false colour tonemapper?
2) How may I make a physically based light measurement that falls on the target in for example watts per square meter?

I have most likely missed a tutorial and/or missed a section in blender; maybe I am not running the correct software even

LuxCore doesn't have false tone mapper so I'm wondering where you have found it ? Is it a Blender feature ?
Support LuxCoreRender project with salts and bounties
Top

Hi. Yes so I was confused between Blender colour management view transform, and the camera image pipeline tonemapper which I have just found.

Regardless of the view transform, I set the image pipeline tonemapper to linear, I enable the IRRADIANCE AOV, (and the Direct diffuse AOV ) and also enable the Irradiance contours line plugin.

All renders have a grid superimposed, which according to the bubble help means no irradiance info available.

I see nothing in the in either the irradiance or direct diffuse channels.

So my question 1 must be for blender not luxcore sorry.

My question 2 still remains... How do I get an Irrandiance channel either separately, or combined ?
Thank you
L
Top

Check the attached test scene for an example: 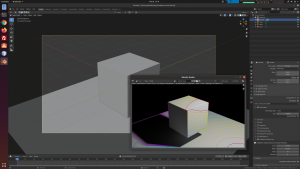 Just save the AOV in .exr format than you can do whatever you want with the file

Thank you. My problem was that there is no irradiance contours available in the caustic part of the render.
Top

Lummy wrote: ↑
Tue May 12, 2020 9:34 pm
Thank you. My problem was that there is no irradiance contours available in the caustic part of the render.

Yes, irradiance AOV uses only eye path samples (while light paths are the one most likely used to render caustics).
Support LuxCoreRender project with salts and bounties
Top
Post Reply
7 posts • Page 1 of 1