Use this forum for general user support and related questions.
Post Reply
3 posts • Page 1 of 1

thanks a lot for this fantastic renderer and this easy blender integration as well as the documentation in the wiki!

I'm trying to model the approximate / expected lighting condition for my kitchen, when I'm going to use a certain LED stripe. The results I get appear plausible to my untrained eye, but I would like to have some feedback on the correctness of this simulation and possible culprits / mistakes I have done in setting up my scene. I've attached a .blend file for someone else to use this, in case its somewhere close to being correct.

My questions / the challenges why the results may be off: Modelling
LED Light: What I intend to model: A LED stripe embedded in a case, covered by a semi-translucent diffractor. This looks like so: 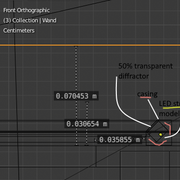 Else: Shapes of a 'white' material which model my kitchen.

Materials:
LED Light: A 800 Lumen emmitting matte material, normalized by Light color, which is slightly 'warm', and a 90deg spread angle. As its "Lumen per Meter" I'd like to model, would "Candela normalized by m^2" the better choice, if I would be able to get that value?
Semi-translucent diffractor: Matte translucent material, effectively transmitting 0.46 light (the vendor mentioned the diffractor to block roughly 50% of light).
Walls / everything else: A Matte material with a near white value (0.854306) and a sigma of 0.02. More or less arbitrarily chosen. While writing this post I realized the documentation states that no matte material should be larger than 0.8. So this is probably quite off. But what would be the 'right' material for a drywall?

Renderer:
BiDir renderer engine is used. As the scene is basically full of indirect light, from the documentation it sounds like I'll have to use that one. But the path engine produced quite different results.

Camera:
Using a 'Camera settings' tonemapper and a setting which would produce a reasonably lighted image (F2.8, 1/10, 200ISO). Tested with a point light source with 800 Lumen, seemed ok-ish.

Results:
Both are very dark. If that is what I could get, I probably end up not doing this project in my real kitchen. If this is a correct represenation of what would be the result, LuxCore just saved me a couple of hundreds of Euros. However, I'm not yet at a point that I want this to be true. 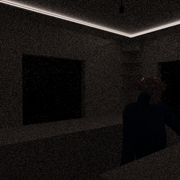 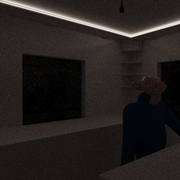 3200 Lumen LED stripe spend comfortable light in a 10 m^2*2.5m room.
If one can look directly into the brightest part of a light source (diffusor) and the active area is much smaller than the inactive area (walls, ceiling, floor) the latter looks dim no matter how bright the light is (eye, camera, film like portrait photo against the sun).
The trick is to design the lamp in a way that the brightest parts are not visible directly. Maybe you remember spot light bulbs with mirroring metal coating on the upper half.
If you rotate the stripes so that the ceiling is used as reflector assuming the stripes about 20-30 cm below the ceiling the room should get a brighter look.
Maybe you have to take a reference render (shot) of the room with a point lamp equal in lumen to the sum of the stripes reduced by diffusor efficiency.

I've also tried to analyse your setup. I have to say, I'm not an ArchViz person, so I don't have the experience with LuxCore behaviour in such a setup, but I have a few thoughts:

First, I agree with FarbigeWelt in that 1600lm/m stripes should providea good amount of light. Top end of the LED stripes I have seen. According to my Reichelt shopping history, I last ordered 240 lm/m

Its difficult though guess what this should look like, because of the diffusor and the second bounce off the walls...
Additionally, it is not clear to me what your goal with this setup is. Do you want to work/cook in there with only the LED stripes, or should it just look cool? There seems to be a regular light bulb in the scene as well, modelled as a point source, but its brightness is set to 0.

One inconsistency between your post and the scene I see is the camera settings. You write 1/10s expusre time but in the file it is set tro 1/100s. Either way, I just took out my camera and took a shot of my kitchen - similarly small and only illuminated by a single 14W LED bulb behind an extra diffuser - at f/5.6 1/25 ISO200 (should be equivalent to F2.8 1/100s) and that looks much brighter than your render. So I would say the render looks too dim.

Using a matte material with reflectance of 0.85 should be ok for white paint. If anything, you should make the aluminium extrusion glossy and slightly colored.

Lastly, your LED is a cube object with all faces emitting, i.e. also emitting backwards. You might be better off with an Area-light (?)
Top
Post Reply
3 posts • Page 1 of 1