As an example of what Luxrender could do I post this file that came from some user in Australia...don't have the details as the thread is gone. I believe that this cannot be done on any renderer out there, it is a real-world volumetric simulation of the atmosphere (there is some minor tweaking –explained on the vanished thread). Maxwell has a similar feature, but it is set up artificially and the user has no real input except for some basic parameters. Anyway...se what you guys think if you have any time!

Glendaloch wrote: ↑
Fri Mar 06, 2020 12:01 pm
As an example of what Luxrender could do I post this file that came from some user in Australia...don't have the details as the thread is gone.

I guess that a lot of people (like me) won't have a working installation of the old LuxRender anymore. So if you want some input for a specific scene and how it can be done with the current LuxCore, I suggest you show some rendered images. It sounds like you still have it set up to do this?
Top

Here's the raw files for Luxrender...you would need to have Luxrender installed....no big deal.

My point here –if you look at the file, you will see what is going on, the genius who has created this, has built a full atmospheric simulation as can be seen by looking at the files...I think, if remembering properly, it is not totally full scale...but very big and beyond the capacities of most 3D programs (Blender!)...anyway, my point being, that real world simulation has something which nothing can surpass whatever the drawbacks of the longer rendering times. Eventually when the tech problems are solved, this will be the way of the future,I mean, just look at the fluids simulators compared to a few years ago.

I remember this one, would make a good example scene (maybe with a cloud layer as well).

I converted it to LuxCore v2.3rc1, attached below.
Note that the render hangs when ending it when rendering on the CPU, which I reported here.
Also, when using the same tonemapper settings I got a result that was way too dark, so I switched to linear instead and eyeballed the gain, so the brigthness is a bit different.

I used LuxRender 1.6 from here to create the reference image.
However, the "Hemi" light source was set to a uniform background color light, which doesn't make sense, so I changed it to distant light instead.

There seems to be something in the scene that's creating super hard light paths, that manifest in more and more fireflies.
If we could find out what that is and optimize it, rendering could be much faster.
In my tests clamping changed the sun color too much, so I didn't use it.

I rendered with "standard" view transform for now, "filmic" might be able to handle the over-exposed areas around the sun in a nicer way (although even "standard" seems to handle it much better than Lux 1.6).

When I started the LuxCore render below, I forgot to add the ocean bump map, which I fixed since, so if you render the scene you'll get a slightly different ocean surface.

Side note, it's nice to be able to fly around in the scene in realtime: https://youtu.be/zet9ZsgpO_U 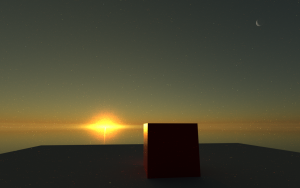 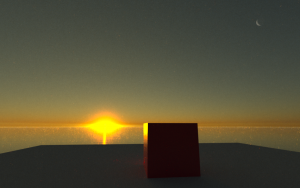 Great Job! Yes, would be super with a cloud layer, think someone posted something like that on the original thread. The youtube clip is good too, should do high-res maybe on Vimeo. The ability to change all these parameters, like the hemi to distant light etc, and the ability to attempt a real world environment is fascinating...anyway interesting work!
Top

B.Y.O.B. wrote: ↑
Fri Mar 06, 2020 5:57 pm
When I started the LuxCore render below, I forgot to add the ocean bump map, which I fixed since, so if you render the scene you'll get a slightly different ocean surface.

1. You also forgot to disable camera volume. I suggest removing it from blendluxcore until it fixed.
2. I tried to render it with bidir, but rays/sample number keep growing while sample/sec stays 0. It doesn't happen if I hide all atmosphere objects.
3. Luxcore doesn't render hidden in viewport objects, even so they're marked for render.
CPU Bidir + Metropolis | Core i5-4570
Top

Why, what does it change?

This is how volume should look (red cube): 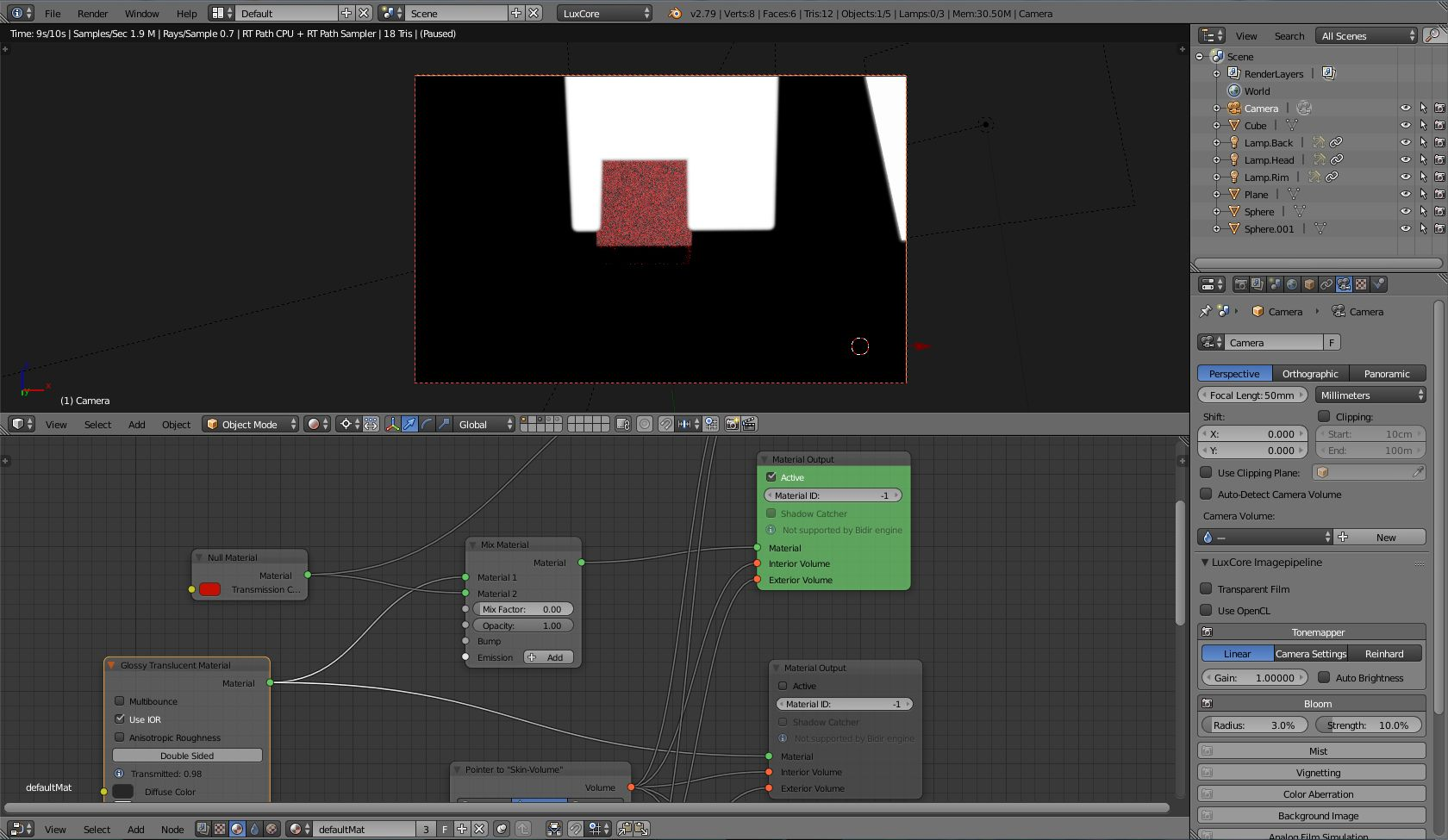 And this is how it does look with camera volume enabled 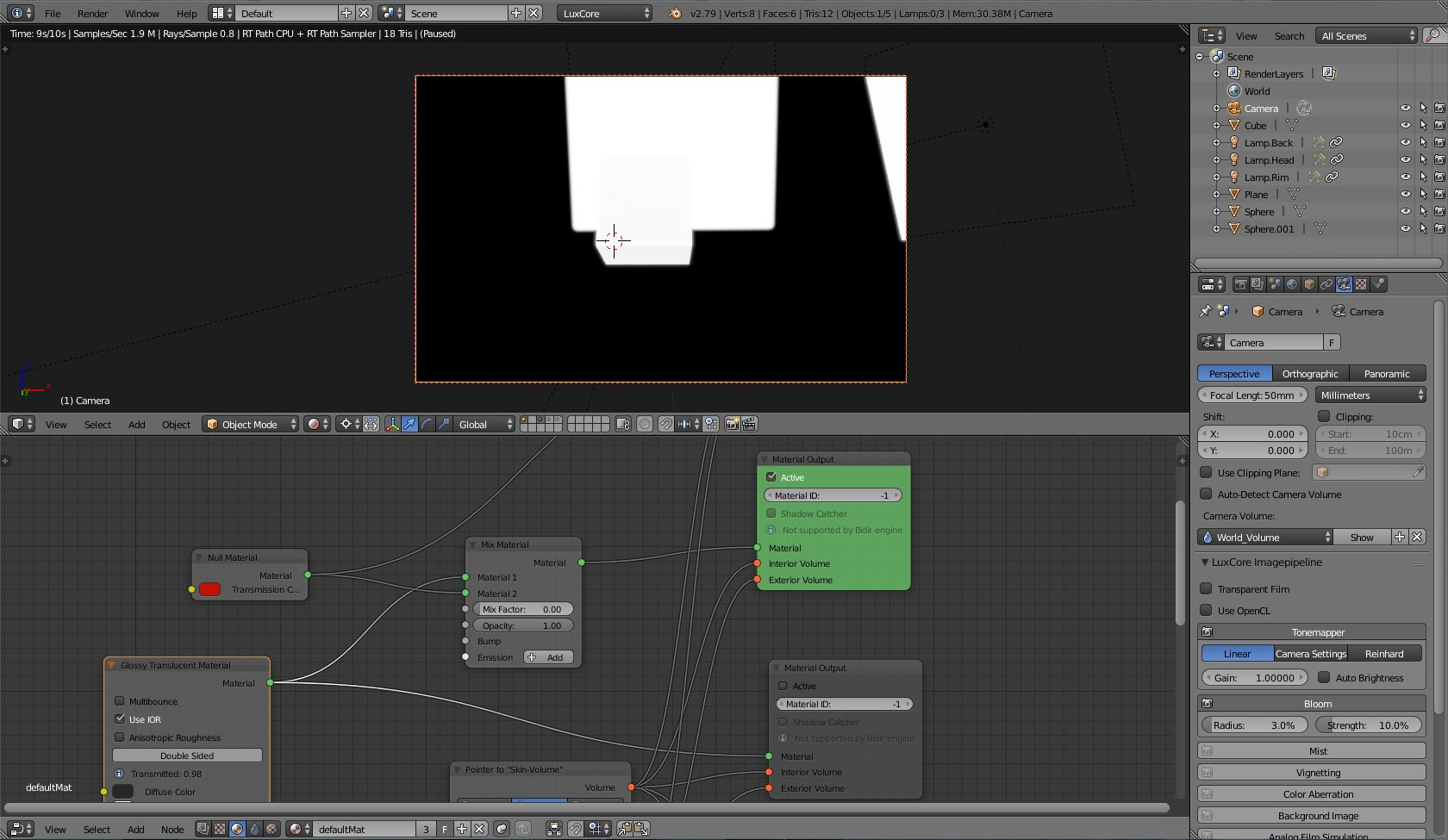 I mean, what does it change in the atmosphere scene?
My Blender Addons | Donate to LuxCore
Top

Sorry, I don't know. It renders too slowly on my GPU, so I didn't check. I just can't see any reason keep camera volume enabled. It either a) doesn't change anything or b) makes something worse.
CPU Bidir + Metropolis | Core i5-4570
Top
Post Reply
25 posts